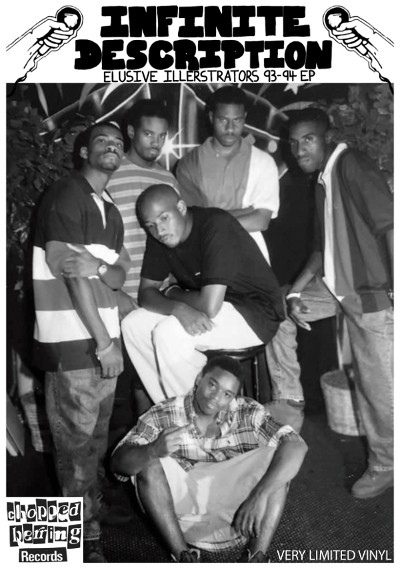 VBR
Infinite Description consisted of Lord Cyrus, Ill Natured Natural, and Bones from Baltimore,MD. They all attended Scott’s Branch Elementary, Old Court Middle, and Milford Mill High School, so had known each other for most of their lives. The group honed their skills in the legendary Tic Toc studios owned by Jay Funk and eventually released a single «Swinging Tight B/W Nasty Ass and Hip-Hop Style» in 1994. They had enough material for a album and the plan was to self release. They put their money together and self-financed 300 copies on wax and 300 tapes through Disc Makers. The local feedback was great and the record led on to more Baltimore Hip Hop releases over the next few years, kick starting a healthy Baltimore scene.
A1. Bullets Don’t Tickle
A2. Swinging Tight
A3. Nasty Ass  Featuring – Royal Flush
A4. That Feelin’
B1. Strictly Hip Hop
B2. Swinging Tight (Remix)
B3. Hip Hop Stylee
B4. Tell You Who I Am