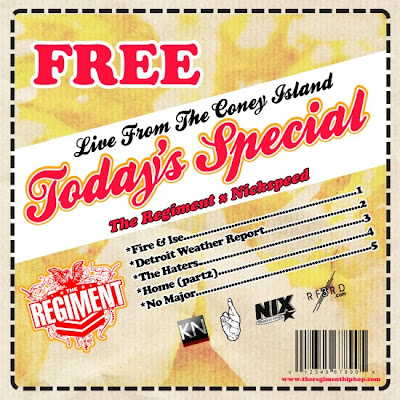 Fresh off the amazing reception of The Regiment‘s 2011 project The Panic Button, The Regiment are preparing to release their best work to date with producer Nick Speed. The fusion of Nick Speed’s edgy and vibrant production, merged with the thought provoking yet relevant lyrics of The Regiment create the collective Live From the Coney Island. Today, they release the 5 track Today’s Special which features The Regiment over previously produced songs Speed created for Talib Kweli, Elzhi and Lloyd Banks. This release is a prelude to the upcoming album Detroit’s Menu.  Today’s Special also features the first single off of the album Detroit’s Menu, “No Major”; a hard hitting, raw and upbeat hip hop banger we have come to know an love from The R! “No Major” is the first true original song from Detroit’s Menu packed with the energy, hard punchlines, and Detroit flavor sure to please from the menu.
Via www.kevinnottingham.com