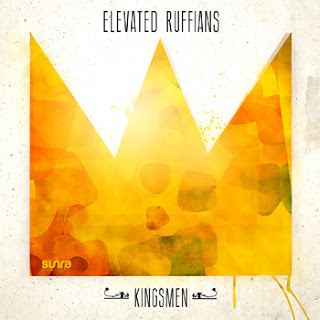 It’s time for another Elevated Ruffians album! The duo of Elevated Soul and the Magnificent Ruffians are back at it with Kingsmen! After the huge success of their first double cd, (Magnificent Soul) the Elevated Ruffians knew they had to work together again to create more fresh hip hop for the fans. This album however has a specific dedication to the great Ben E. King. Hence the name, “Kingsmen”. Each song on this EP has a beat that was flipped or sampled or inspired by a previous work of Ben E. King. So once again you will get the old school blues and soul vibe on this album because that is exactly how they intended it to be. With that said, sit back, turn on the blue lights, get a cigar and a small glass of crown royal and play this album. The Elevated Ruffians Kingsmen album…. Super Dynamite Soul!!!
Tracklist
1. Keep Rolling Feat Boho Fau
2. Take A Chance Feat Sadat X
3. You Can’t Hide Feat Born 5th Child
4. It Hurts
5. Too Bad (Interlude)
6. I Won’t Feat Five O’ Clock
7. Don’t Play (No Mo) Feat Dkoldis
8. Ain’t Gonna (His Version)
9. Ain’t Gonna (Her Version) Feat Shannon McGuire
10. My Love (Interlude)
11. Relationships Feat Boho Fau
12. Focused Feat Dkoldis
13. Testify
14. Bonus Track#1 Take A Chance (Remix)
15. Bonus Track#2 Testify (Remix) Feat Eno.D