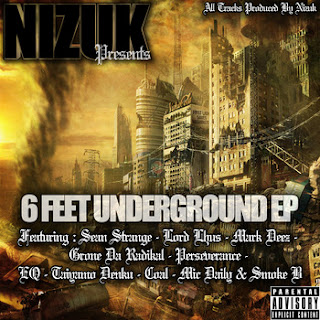 Buy Nizuk beats here :
http://www.soundcloud.com/nizukbeatsforsale
Check out the lastest tracks from Nizuk here:
http://www.reverbnation.com/nizuk
Add Nizuk to your Facebook friends:http://www.facebook.com/nizuk.beats.frLike the Official Nizuk Facebook Page:http://www.facebook.com/nizukfanpage
«Nizuk is a french Hip Hop producer from Paris surburb, France. Influenced by Necro, he started making beats in 2010 and has been working hard on his productions untill he got good feedbacks by a lot of people. Nizuk did some collaborations with Lord Lhus, Sean Strange, Mark Deez, Trash Gordon, Verbal Godz, and more… He entered the «Dirty clanzmen» crew, which is a group affiiliated to the «Wu Tang Managment» & the only Official Tribute Crew to Ol’ Dirty Bastard. Back in the day, Nizuk used to be a depressed & alcaholic teenager who couldn’t feel good in the society. In October 2008, he tried to kill himself, two weeks later he got caught by the police for selling hashish in Paris. Nizuk almost went to jail, and took his freedom as an opportunity to start making music and making money legally. Nizuk is currently working on the «Brotherhood Of The Beasts» first EP named «6 Feet Underground» which features Lord Lhus, Sean Strange, Perseverance, Taiyamo Denku… From 2011 November, Nizuk will have a real professional Home-Studio, and will start making Boom Bap beats with his ASR-10 (used by Necro, AL’Tarba, etc…)«.